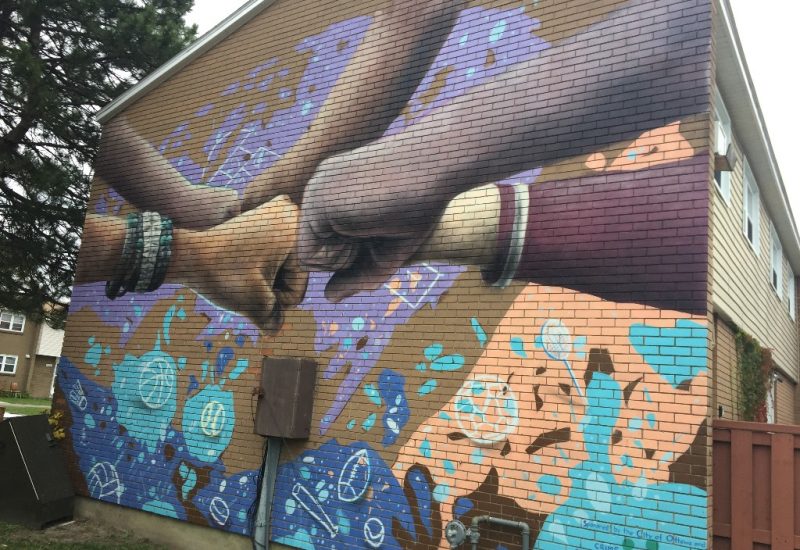 A Paint it Up! mural painted on the side of Banff Avenue Community House. Photo courtesy of Nancy Worsfold.

In an effort to combat the presence of graffiti vandalism in Ottawa, the city’s Paint it Up! program has evolved to reduce graffiti, enhance community beautification and engage youth with the arts in their community.

Since the program’s inception in 2010, it has involved over 2,700 youths in the creation of about 85 murals projects across the city.

The deadline for the program’s applications this year is on April 23 at 4 p.m.

“It’s a wonderful way to ensure that youth have an opportunity to be involved with beautification of their neighbourhoods,” says City Coun. Rawlson King.

“It serves to ensure community safety, because if there are murals, then there aren’t tags and graffiti that might be gang associated. And when the community looks better, it feels better about itself,” he says.

After attending hundreds of community meetings, Executive Director of Crime Prevention Ottawa (CPO) Nancy Worsfold says she’s found many citizens who are concerned about tagging and graffiti in their neighbourhoods.

Police say instances of mischief to property, such as graffiti tagging, is one of the most serious violations seen by officers in the Hate Crime Unit.

“I am always happy to promote these high-quality city programs that really are working to improve community safety and community quality of life,” says King, who also sits on the CPO board.

CPO funds the project, receives the applications, manages a selection committee and works with agencies to assist them with their projects.

“The projects usually are a partnership between an organization that has some expertise working with youth, an artist, and a property-owner of some kind who is willing to have a mural on their property,” says Worsfold.

Many organizations have been involved with the program over the years, with youth from community organizations being the main demographic for the projects.

But Paint it Up! has also provided Indigenous organizations with a platform to showcase their artwork.

Worsfold says the murals have had a great positive effect on the community through beautification and supporting local youth while responding to tagging.

The locations of the murals have varied greatly across the city, from being displayed on city properties to the walls of local business owners.

“I think it’s multi-faceted, but that’s the wonderful thing about the program. It brings together all sorts of people and organizations to really kind of create a communal benefit for the neighbourhoods,” says King.