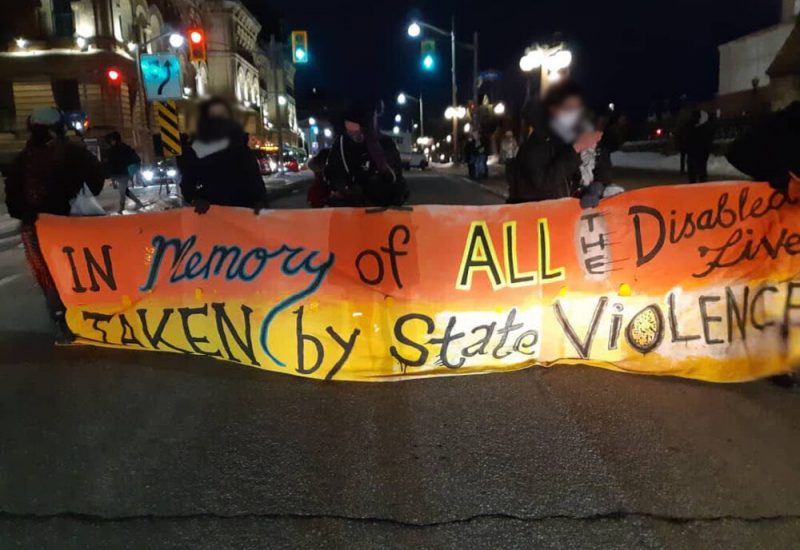 Disability Day of Mourning happens annually to commemorate disabled lives lost to filicide, inadequate care and neglect. This year, the Disability Justice Network of Ontario used the day of mourning to protest a bill that could bring more death to the disabled community. Photo by Gabby Calugay-Casuga.

Protestors took over the intersection of Wellington St. and Elgin St. in downtown Ottawa for the annual Disability Day of Mourning on March 1.

This year, the gathering sought to grieve disabled lives that were lost to insufficient care during the pandemic.

Not long after the protestors took the intersection, police arrived on scene. No one was detained but a lane was opened up to allow traffic through. Commuters, whose rides were interrupted by the action, flung insults from their cars as they drove through the police-controlled traffic lane. Despite rising anger from commuters, the protestors felt it necessary to hold the intersection.

“Shutting down the intersection was critical to recognizing this was not okay,” said Megan Linton, an organizer of the event. “Stopping the moment, the traffic, the noise and the continuing on to show that this is not okay, and we will not accept this as our reality.”

Members of the Disability Justice Network of Ontario, Criminalization and Punishment Education Project and the Ottawa Black Diaspora Coalition were present. As well, three members of the Ottawa Street Medics organization were on scene to provide support and keep the protestors safe.

Tucker Jay, an Ottawa Street Medic, said they went to the event because it was something that spoke to their own lived experience.

“In solidarity first and foremost is what drew me to public health and safety,” Jay said. “Disability intersects with almost every other form of activism. If your activism is not including the disabled community, it is not intersectional.”

While a vigil takes place annually for the Disability Day of Mourning, this year’s action had a new focus. Bill C-7 was first introduced and read in the house of commons Feb. 24, 2020. Bill C-7, according to the transcribed debates from the House of Commons, proposes changing eligibility criteria for medical assistance in dying. Supporters of the bill believe it will help reduce the suffering of people with disabilities.

A transcript of a Feb. 26, 2020 debate on Bill C-7 shows that different Members of Parliament spoke in support of the legislation.

“I recently met one of my constituents, Caroline Parent, a woman in her 40s who seemed quite engaged and active. Ms. Parent told me that she feels trapped in her own body and hopeless about her life. That was a very powerful day. Her story was overwhelming,” said Abitibi—Témiscamingue Member of Parliament Sebastien Lemire. “She told me that she had gotten to the point of planning a trip to Switzerland, where medical assistance in dying is accessible, and planned to return in the luggage hold. This was a harrowing story, and I am pleased to see that this bill is making some progress in this respect.”

But Monday’s event showed that not everyone feels this way.

Linton said this bill should not have been put forward when actions weren’t taken to improve accessibility for disabled people.

“We believe in the right to choose,” Linton said, “but when you are given the option of 10 years to get access to a wheelchair or 90 days to get medical assistance in dying, that’s not a choice.”