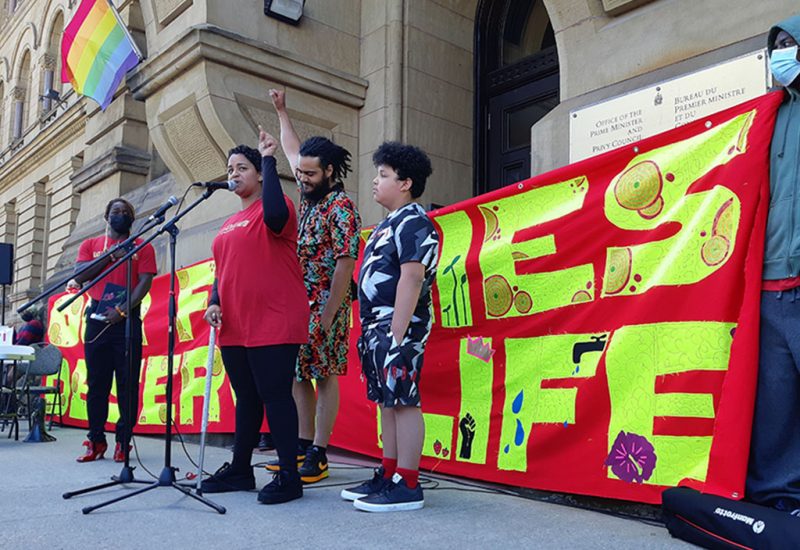 Chantelle Krupka, a survivor of an attack by Peel police, speaks to a crowd and calls to defund the police. Photo by Gabby Calugay-Casuga.

Ten families affected by police violence gathered to renew calls to defund, disarm and dismantle police on the steps of the Prime Minister’s office on Saturday.

The action marked Juneteenth, a commemoration of the end of slavery in the U.S. annually on June 19.

The conference on Saturday highlighted the continued fight against police violence which disproportionately affects Black and Indigenous people.

Moore’s grandmother, Grace Frank, said she had many questions about Moore’s death that have still gone unanswered.

Syrus Marcus Ware, co-founder of Black Lives Matter Canada, said in a live-streamed interview that while slavery is over, the suffering of Black people is still ongoing.

Through the tragedy and grieving, the families said they shared their stories to remind people of the systemic oppression suffered by Black and Indigenous people at the hands of police.

While the calls to defund, disarm and dismantle policing systems in Canada have been pushed for years, the affected families at the forefront of this battle say they are suffering.

La Tanya Grant, a cousin of Jermain Carby who was murdered by police, said she has not had the chance to grieve her cousin yet.

“It’s a lot. Losing a family member and then having to fight right away an not even being able to grieve,” Grant said. “People can support by coming out to these events and show they stand in solidarity with us. There are so many different ways to support but the government should be taking the heavy part and making sure families are okay.”

Chantelle Krupka, who was shot by Peel police in 2020, said that she has survivor’s guilt for having survived the police attack that she experienced. Krupka said that it is solidarity actions that are therapeutic for her.

“This is very therapeutic for me. To be able to speak out and speak the truth. I am just grateful for the opportunity,” Krupka said.

Krupka also had a chance to address the crowd. She said that the families present at Saturday’s action were proof that state violence against marginalized people has never ended. Krupka said that sometimes people think violence against Black and Indigenous people is in the past, but she urged people to look at all the lives that have met an untimely end.

“When 215 babies were found buried, Justin Trudeau called it a dark chapter in our history. This is not our history it is our present. This is the same dark chapter that we’re living. Look how many mothers here have buried their children,” Krupka said.