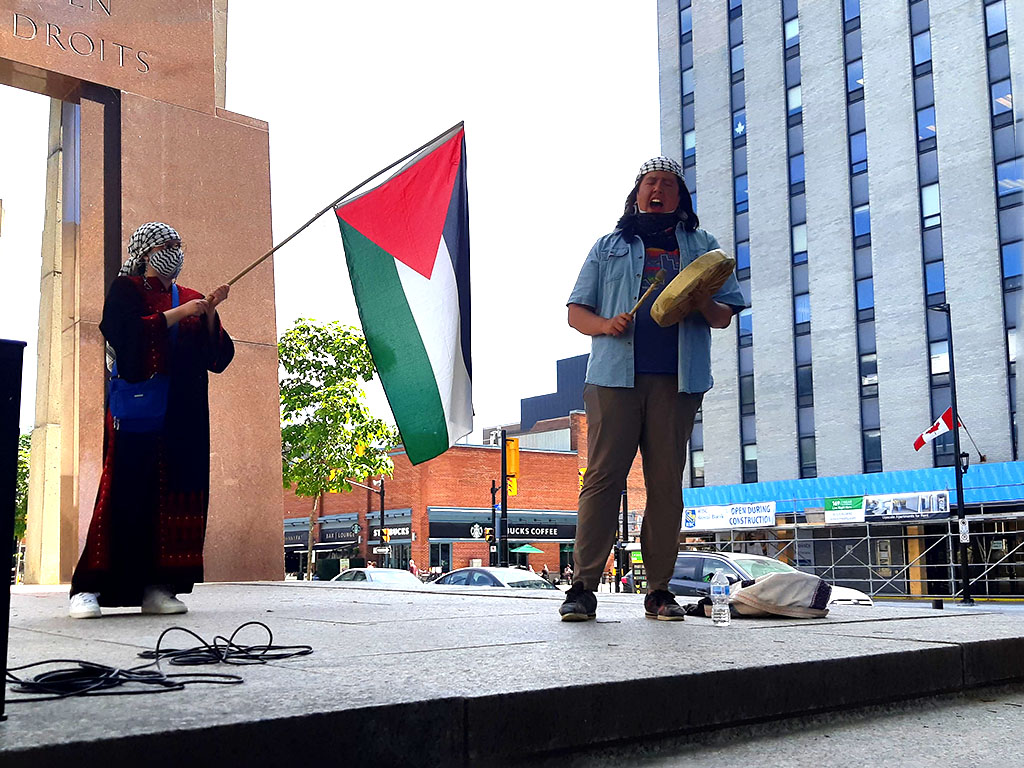 At the Human Rights Monument yesterday, June 17, Palestinian and Indigenous activists hosted a solidarity event called “From Turtle Island to Palestine.” According to an Instagram post by the organizers, the goal was to “stand against settler-colonialism in all its forms.”

“As we speak, we are on stolen land,” Nour Hisham, a Palestinian organizer for the event, said. “As Palestinians we have had our land stolen from us.”

According to the Human Rights Watch, “The Israeli army has for over 50 years used broadly worded military orders to arrest Palestinian journalists, activists and others for their speech and activities – much of it non-violent – protesting, criticizing or opposing Israeli policies.”

As well, a 2020 press statement from the Office of the Correctional Investigator said that over 30 per cent of inmates are Indigenous while Indigenous people account for only 5 per cent of the Canadian population.

“There is so much we can learn from each other,” Waaskahiikiin said.

Hisham said, “The first time we met we were like, ‘Oh this happened to your people? It happened to my people!’”

Waaskahiikiin added that building this understanding is important to building a community that can support each other in their liberation movements.

As solidarity grows between BIPOC communities, Waaskahiikiin wanted to share that they do not see racialized people living on unceded territory as settlers the same way they see white Canadians.

“Black people never got the opportunity to settle here. Refugees from other countries never had a choice,” Waaskahiikiin said. “We all have the same goal of sustainability and I see that in these people here. I see it in people who come to actions, but I do not see it in Canada.”

Hisham agreed and said that the way forward is to reframe how people relate to the land.

“As a Palestinian who grew up here, I still know that every part of our culture is related to the land,” Hisham said. “You see this [a colonial relationship to the land] when they uproot olive trees that take several generations to grow. Do Indigenous people uproot their trees? Do they bring in foreign flora and fauna? No, that is people that don’t have relationship to the land.”