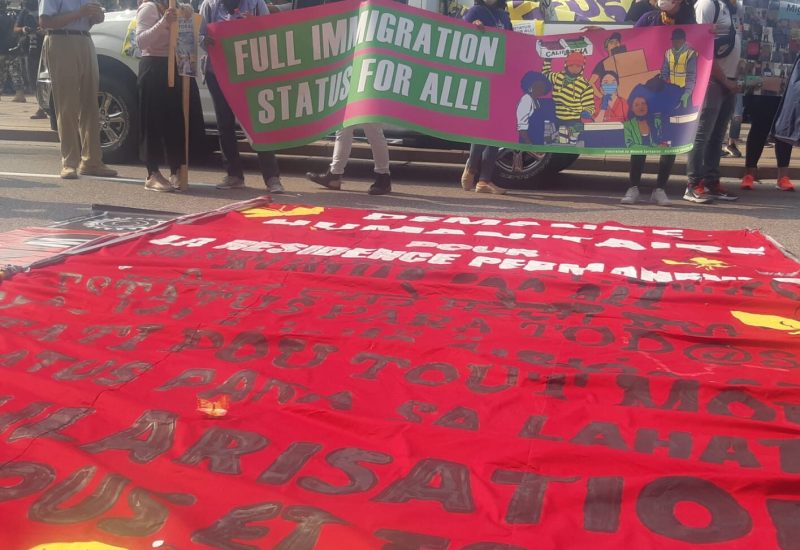 Migrants mobilized in Ottawa on Sunday, arriving in droves from Montreal and Toronto to march on Parliament, calling for Justin Trudeau to grant all migrants full and permanent residential status.

The march was organized by the Migrant Rights Network, an alliance of migrants across Canada advocating for migrant rights. Their call for full and permanent status for all, seeks to end a divide between migrants whose rights differ depending on the status they are given upon entering the country, and only while they remain under that status.

Syed Hussan, a member of the Migrant Rights Network, says that asking for permanent resident status is just asking for all rights for people that come into Canada.

“Immigration is status is used to divide us,” he said.

The Migrant Rights Network estimates that 1 in 23 migrants is in Canada without permanent resident status.

“If you don’t have labour laws for 1 in 23 people then what are labour laws really? If 1 in 23 people don’t have access to Covid-19 testing, vaccines, treatment, do we really have public health?” he asked. “We are living in a society where the vast majority of people who are migrants are unable to have any of the basic rights and freedoms.”

At least 14 migrant farm workers died from COVID-19 last year, revealing that they had no access to healthcare under their employers and were forced to work in poor or unsafe conditions. Many international students lost their status as a result of increased tuition fees, and six committed suicide.

Like many Canadians, migrants suffered loss of jobs during the pandemic. However, for many migrants, refugees and undocumented migrants, they had no access to income supports or healthcare. This means that many could not even access a COVID-19 test if they thought they might be ill.

Hady Anne, a refugee from Mauritania, knows firsthand how frightening the pandemic was to refugees and undocumented migrants.

“They lost their jobs. They can’t go out because they’re afraid of police and deportation,” he explained. Many migrants he knows were given work permits, but were afraid to return to their homes after the government stopped issuing them additional ones.

“We are exploited like slaves in this country. And I think that is not acceptable in the 21st century,” he said.

The Migrants Rights Network believes that a one-tiered immigration system solves many of these problems, granting all migrants the same rights as permanent residents.

“When they’re on those permits, if they are abused at work they can’t speak up for fear of being terminated, becoming homeless, or being deported. Many can’t get healthcare. We’re seeing communities of people, millions of people, are unable to have equal rights and protections,” he said.

Listen to the voices of migrants below, asking for permanent status for all immigrants: