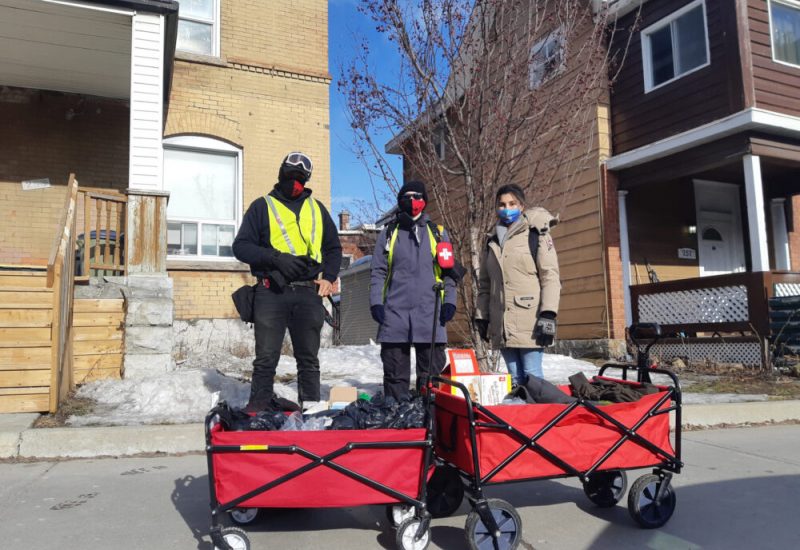 Ottawa Street Medics roll wagons through communities and hand out supplies to those in need. Photo by Gabby Calugay-Casuga.

With CPEP’s National Day of Action against carceral systems coming up tomorrow, an Ottawa mutual aid group explains how a world without policing might work.

For months, the Ottawa Street Medics (OSM) have been going on patrols in at-risk areas providing food, care packages and other supplies to Ottawa’s homeless population. The group characterizes their work as “mutual aid” which is a form of community service that some police abolitionists believe can replace policing.

Ottawa city officials have been resistant to pushes to defund and abolish police systems. In a recent Capital Current article by Lena El-Shennawy and Alyssa Harris, Mayor Jim Watson said that he’s reluctant to send an unarmed community support worker into situations that might be dangerous.

But despite skepticism towards community support groups replacing policing, some members of OSM said they firmly believe it is the way towards progress. Kate Peer and Desmond Evans, two members of OSM who regularly do outreach work for the group, explained how mutual aid works and how it differs from policing.

“Mutual aid is the idea that we are capable as a community of supporting each other,” Peer said. “As people who know each other and understand each other’s situation as neighbours, we have more knowledge of exactly what it is that people need.”

The Ottawa Police Service (OPS) states that it does this work through their Neighbourhood Resource Teams (NRTs). Their website says these teams are the “cornerstone to OPS’ community policing model.” The program, according to the website, assigns an officer to a neighbourhood for a minimum of two years. These officers will work with community residents, organizations and other groups to prevent crime and address underlying socio-economic issues.

Evans said this is not actually what NRTs are doing. He said despite claims made by the OPS, it is still community groups who are doing the support work, not police.

Peer, who studied Public Policy and Foreign Affairs at Carleton University, had originally planned to go into security work and, potentially, be employed by CSIS or the RCMP. Peer said her experience in this field has given her insight on how policing works and said she concluded that it can never be fully equitable.

“RCMP was designed to protect certain communities. At the beginning those communities were exclusively white colonial folks. As time has gone, we have become better at expanding that scope of protection, but it has not expanded far enough…The baseline structure is there will always be someone who is perceived as a threat,” she added.

OSM sent CHUO a report about an incident with police. This report outlines an event that happened on Feb. 28. According to the report, an intoxicated woman was approached by two police cars whose lights were on. An officer approached the OSM team and explained that the woman would not accept help from the police.

Evans said people often refuse help from the police due to attitudes of distrust. Peer said a similar thing and explained that many people do not accept help from OSM until they are certain the group is not associated with OPS.

Evans said the way the police arrive onto a scene is part of the reason their presence can be distressing.

“They still come with their lights and sirens on. They still come wearing all black with a gun on their waist,” Evans said. “It creates a lot of distrust because when the police come, violence arrives.”

Evans said he felt that those who are still skeptical of mutual aid networks should reflect on their experiences during the COVID-19 pandemic and the events involving police that they have seen unfold around them.

“If you think that we need to be dumping billions of dollars into policing systems all over the country, what are they going to do for you?” Evans asked. “During the pandemic, what has the police done for you?”