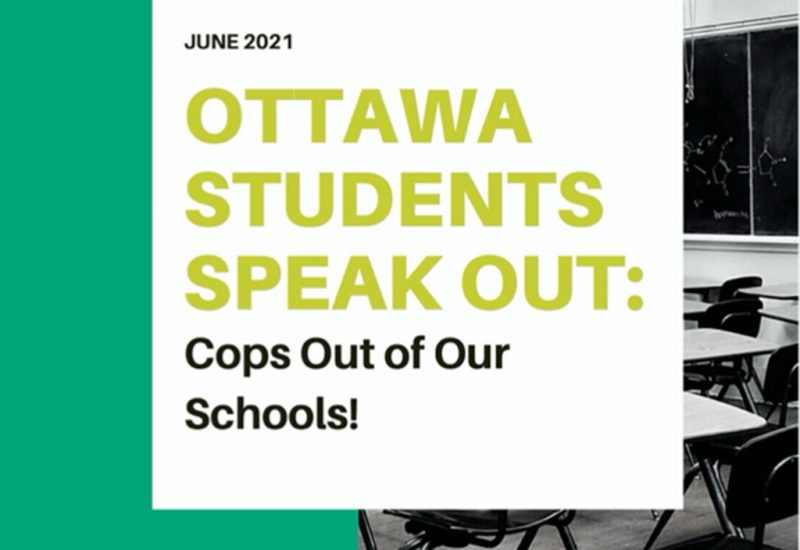 After hearing testimonies from current and former OCDSB students, ASILU and reviewing the HREA report, OCDSB supported the chair’s decision to continue discussion around policing in schools. Since policing in schools is not an action item, action will take place at a later date. Photo courtesy of ASILU collective.

The Ottawa Carleton District School Board (OCDSB) voted to defer action on ending police presence in schools during a meeting of the Committee of the Whole yesterday.

“What we have found through our report is consistent to what racialized communities have been speaking to for decades which is that policing is violence,” Hailey Dash, co-founder of ASILU collective, said. “Ottawa’s SRO program must be immediately terminated as per our recommendations in our report.”

In a press conference held on Monday for the launch of the ASILU report, Dash pointed to the report done by OCDSB’s Office of the Human Rights and Equity Advisor (HREA) as further proof that police in schools and the SRO program are not beneficial to the student body.

“The OCDSB review has supported our demands,” Dash said.

The findings of the HREA’s reports were presented to the OCDSB by Mary Jane Farrish at Tuesday’s meeting.

“Changes do need to be made to limit police engagement in schools,” Farrish said. “The observations presented in the HREA’s report question the hypothesis that relationship building with police through Resource Officers in schools achieves positive poutcomes for students.”

In light of the information presented by ASILU collective, their allies and the office of the HREA, Board Trustee Lyra Evans tried to move for the board to take action on the recommendations presented in the report. These recommendations were that the board “end its participation in the School Resource Officer Program” and “revise and harmonize all relevant contractual commitments, policies and procedures to limit police involvement at schools to necessary involvement, introduce accountability and transparency mechanisms for all police involvement and embed Indigenous rights, human rights and children’s rights and survivor-centred practices.”

Evans seemed shocked to find out that she could not actually put forward any motions at yesterday’s meeting because the board had only planned to discuss police involvement in schools.

Evans then tried to put forward a motion to change the agenda item from a discussion item to an action item. This would have allowed the Board to take a vote on whether or not to end the SRO program during last night’s meeting. This motion was shut down by meeting chair Keith Penny.

When Evans challenged Penny’s decision to not take action on the recommendations put forward by ASILU and the HREA, the board voted to uphold the chair’s decision.

The ASILU was frustrated as the organization has been calling for the removal of police presence in schools for a year. Dash said that she and ASILU were under the impression that the board would be able to vote on ending the SRO program that same night.

“The deferral of voting as a result of petty bureaucracy is shameful to say the least,” Dash said.

Another person involved with ASILU, Mae Mason, spoke at yesterday’s meeting as a delegate. They said that deferring the decision ignored the harm that may be caused by police in schools in the interim.

“I definitely think that just suspending the program really follows a reformist framework,” Mason said. “We have seen year after year that these reforms do not work.”

ASILU, as an abolitionist group, also think that reform of suspension of police programs is not enough.