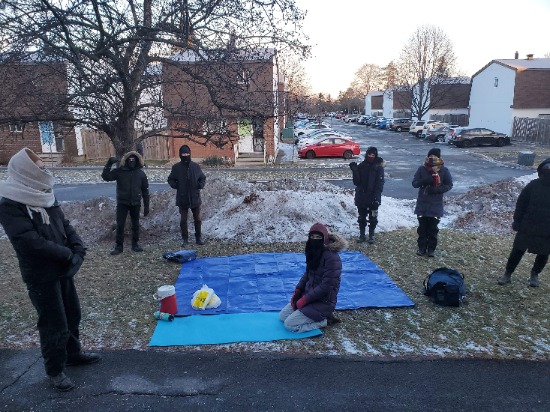 A protest blocking the eviction of a grieving widow before police and sheriff arrived on the scene on Dec. 29, 2020. Photo courtesy of Sam Hersh.

The Ontario government issued a pause on residential evictions during the state of emergency and stay-at-home order put in place Jan. 14.

The Landlord and Tenant Board (LTB) continues to accept applications, hold hearings and issue eviction notices but the enforcement of evictions has been postponed unless needed in urgent situations such as illegal activity.

COVID-19 has wreaked havoc on Canadians financially — Statistics Canada reported that the economy lost almost 213,000 jobs in January alone, dropping the employment rate by 1.2 per cent.

Before the province’s pause in evictions, many fell victim to Ontario’s ‘eviction blitz’ as a result of not being able to make rent payments with some being forced out of their home in the midst of a global pandemic.

Sam Hersh organized a protest to prevent a grieving widow from becoming a victim of the eviction blitz on Dec. 29, 2020.

“She had to quit her job to take care of her dying fiancé who was on dialysis. She wasn’t able to pay her rent,” says Hersh.

Amanda Proulx’s fiancé died the day before her hearing with the LTB and her request for an extension for the hearing was denied.

After losing a fiancé, she was then faced with losing her home as the sheriff and 12 police officers sought to evict her on that cold day in front of a dozen protestors.

The peak of the protest saw a dozen protestors who were unarmed and bundled for the weather.

“It’s just such a small amount of people that even one armed police officer would have intimidated us enough,” says Hersh.

Hersh says these evictions underscore a “failure of our municipal government.” He calls the police response to the eviction protest a “misuse of resources,” and publicly tweeted the police funding could have went towards housing.

There were 12 of us there at the end of the day and 12 @OttawaPolice officers.

Why did they need 12 heavily armed cops for 12 unarmed peaceful protesters. Beats me. Seems like a waste of @ottawacity resources. Money that couldve been used for…housing maybe? 2/2

“The police budget increase alone is $13.2 million this year, that’s more than half of what all the community organizations got in funding from the city,” says Hersh.

In 2020, the City of Ottawa allocated $3 million to 73 social services organizations. 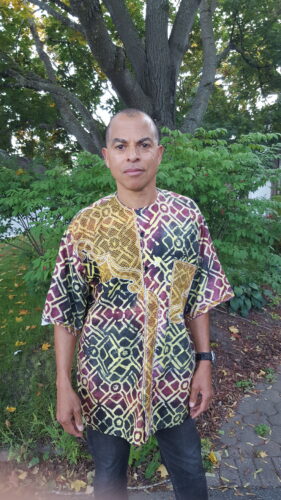 According to Hersh, the police-involved evictions present the risk of excessive uses of police force.

“They were aggressive,” he says and recalls the sheriff knocking Proulx’s door down and cops shoving protestors out of the way.

Browne recalls the deaths of Machuar Madut in 2019 and Pierre Coriolan in 2017 as they were killed by Canadian police, both of them being black immigrants suffering from mental health issues and receiving eviction notices before their confrontations with police.

Browne says that subjecting vulnerable people to the threat of eviction during a pandemic is a “recipe for disaster.”

“With COVID, we certainly expect people are under a lot of stress. The last thing we need is adding eviction to the pile,” says Browne.

On Jan. 31, 2021 the province ordered the Ontario Regulation 13/21, which states no person can enforce eviction unless the LTB requests the sheriff expedite the enforcement of the order.

The order is set to be revoked on Feb. 23 unless it is extended along with the stay-at-home order.

“Our government will ensure that residential evictions continue to be paused for the remainder of the state of emergency, as long as it lasts,” said Minister of Municipal Affairs and Housing Steve Clark.