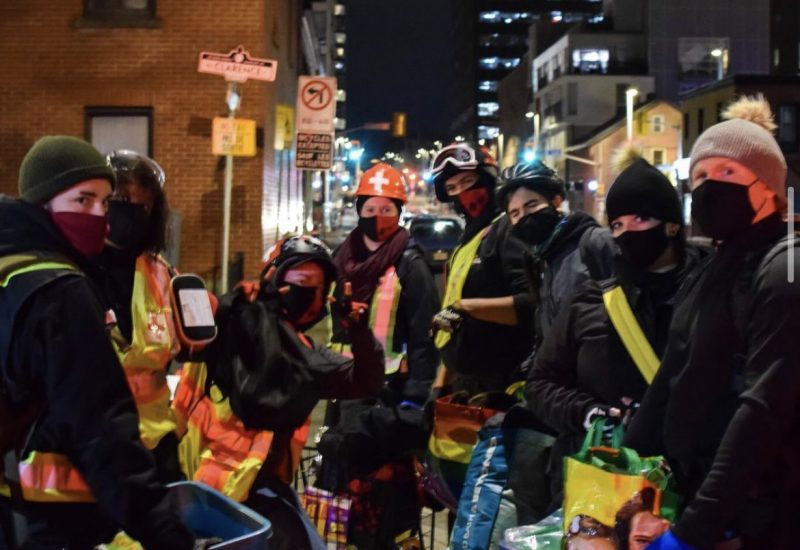 Bailey is no stranger to activism — he’s been doing it for over a decade. When the pandemic hit, he got laid off from his construction job and, with the new found time on his hands, he decided to help those in need.

“I began organizing people, and kind of reaching out to people I knew in the community from my previous activism and stuff like that to, you know, get together and organize a solid mutual aid initiative to get people fed and ideally housed and you know fill in the gaps that are huge,” Bailey said.

One of the group’s purposes is to provide essentials to homeless people and first aid at protests.

“He went out and said ‘all right, I’m gonna go feed homeless people and more people hopped on board,'” said Ottawa Street Medics member Aidan, who asked CHUO not to publish his last name.

Aidan has been with the Ottawa Street Medics for four months. It has grown to a team of more than 25 people from the community — some cook while others go to every protest, every patrol and every ‘drop’ in the city.

The Street Medics are a pretty established concept around the world already. According to a Street Medics Guide from Paper Revolution, “street medics, or action medics, are volunteers with varying degrees of medical training who attend protests and demonstrations to provide medical care such as first aid. Unlike regular emergency medical technicians, who serve with more established institutions, street medics usually operate in a less formal manner and often in support of local volunteer collectives.”

Every week, throughout the week, volunteers gather supplies such as clothes and then on Saturdays, they prepare hot meals and hand everything out, Aidan explained. The group is mobile so they go to shelters like Shepherds of Good Hope located on King Edward Avenue and other places, like Salvation Army and Value Village stores, mostly in the downtown area. They’re also planning on expanding their services to Vanier.

Volunteers also take down requests from the community; if anybody needed boots or a jacket, a member from the medics team would write it down, look for specific items through their donations that they receive and work with other grassroots community groups in the city such as Hit The Streets Ottawa.

The group’s main goal is to make sure everyone on the streets are fed and have stuff they need to survive outside, especially in winter.

“A lot of people have been inspired to kind of make a difference in their own community instead of relying on the government for things,” said Aidan.

“We pride ourselves as an organization on using community to provide support right, so instead of working with government agencies, uh particularly cops, you’ll see a lot of outreach groups work with the police but, as we find, people trust us a lot more once we tell them we don’t work with outreach, we don’t work with social workers, we don’t work with cops,” said Aidan. “It’s really just people who come together and we all have the same kind of goal in mind which is just mutual aid and helping people out.” He added talking about the organization.

Aidan also mentioned that the collective has began doing community patrol, focusing on harm reduction by checking on those involved in the streets and see if they need anything. They hand out clean stems, pipes and needles to those who need it.

According to Aidan, the collective is much more effective than most government groups since there are no rules and they can better adapt to the needs of the community.

Although the group was founded at the beginning of the pandemic, volunteers have faced many challenges due to the national lockdown.

“When we prepare for drops, usually we would be able to host a few people, post up in a kitchen, you know, start making food, have the hot meals ready to go in two to three hours for whoever’s hosting, and it would maybe take five hours in total to just get all the food ready to go to the drop site and stuff like that. But right now, we can’t do that,” Aidan explained.

As of now, all tasks have to be delegated and they must prepare even more in order to drop off food and essentials at specific places during the pandemic.

Another concern is that volunteers could contract COVID-19. While working, team members are in shelter environments, in small spaces where there’s often not enough masks for everybody. Some volunteers have even had to get tested and self-isolate, but Aiden said there haven’t been any cases in their circle so far.

Currently, the team is running an art auction fundraiser. Working with artists across Canada, the event aims to raise funds for the collective, which will go towards food, clothing, harm reduction supplies, as well as providing physiotherapy to a member of the Ottawa Street Medics who was injured during the Day of Action for Anishinabeg and Black Lives demonstration that took place near the end of November. The member was at the protest to provide first aid.

While the collective’s main goal is to help homeless people and those on the street, they also want to avoid increasing the homeless population. Ottawa Street Medics, along with CAMS Ottawa (Coalition Against Surveilance), CPEP (Criminalization and Punishment Education Project) and Horizon Ottawa, recently tried to help a woman who was facing eviction while caring for her dying fiancé by protesting in front her home. According to Aidan, there are multiple fundraisers going on to help her pay the first and last month’s rent for a new home.

In order to make lasting change, Aidan said it begins with the City of Ottawa.

This year, Ottawa Street Medics will be laying out their structure and values in order to be more effective as an organization. They want to get to know more people and plan on expanding to Vanier. The organization also plans on creating new partnerships with other small community organizations along with introducing new members to their medics team.

“Be the change you wanna see,” said Aidan.

A new Ottawa Street Medics support line has been implemented and will be run exclusively by Bailey. Those in need can contact 343-297-4430.