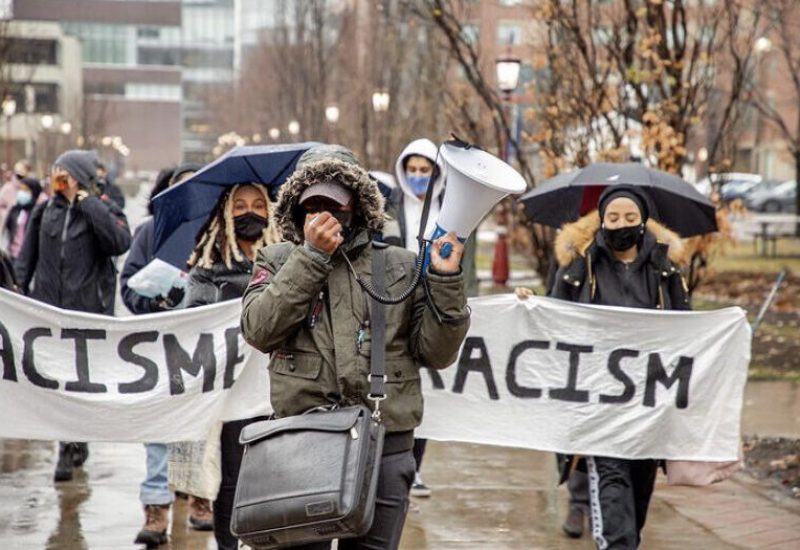 Organizers walking outside near the University of Ottawa prostesting the new anti-racism committee. Photo courtesy of @Uracism.e instagram page.

Students hosted a week long sit-in at the University of Ottawa beginning on Dec. 4 to hold the institution accountable for concerns on the president’s approach in addressing anti-Black racism on campus.

The protest was held at the Tabaret building and was organized by the Coalition Against Campus Racism. 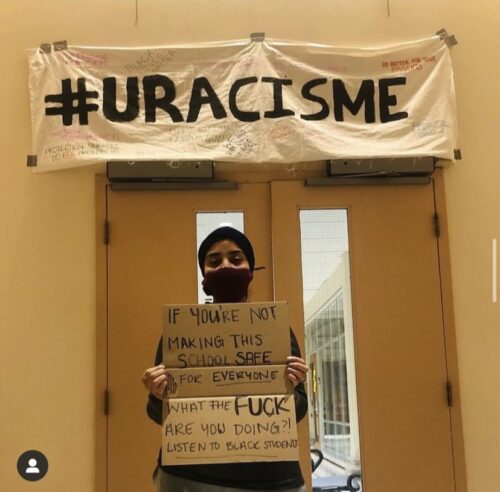 Student holding up a banner during protest. Photo courtesy of the @khadijax23 Instagram page.

The sit-in was a response to President Jacques Fremont’s launch of a new “Action Committee on Anti-Racism and Inclusion” on Nov. 23 following an incident with a faculty member using the N-word in class in September. The committee replaced the previous “President’s Advisory Committee for an Anti-Racist and Inclusive Campus” which had representatives from the UOSU, BLSA, APUO BIPOC Caucus and GRIPO.

“President Fremont claims that the previous committee was ineffective and inefficient,” the Coalition stated.

The Coalition suggested that the new action committee disbanded the previous committee without consulting any of the organizations. The protest organizers believe that the move was a complete dismissal of all the needs put forward by students.

“Black students on our campus continue to feel unheard and unsafe,” the Coalition stated in the release.

Dilaye Desta, a recent graduate and former director of community engagement for the Black Student Leaders Association, said the new committee was struck in bad faith, as it dissolved an advisory committee that had been working on the same issues for a year.

On Nov. 29, a panel was held over Zoom where students who had participated in the previous committee shared negative experiences during their time. These concerns included exploitation, damaging practices such as trauma mining, tone policing during meetings and other issues. The sit-in began five days later.

The University of Ottawa’s administration was called on to meet and discuss the following demands with protesters (taken from the Coalition’s Instagram):

After more than 20 hours, a spokesperson for the Coalition was invited to meet with Eric Bercier, associate vice president of Student Affairs and Noel Badiou, director of the Human Rights Office.

According to the Coalition’s Instagram, organizers were left confused after the meeting since both administrators reportedly said that they didn’t have any authority to implement these kinds of changes and that it would be up to senior leadership.

The new co-chair of the University of Ottawa’s new action committee, Professor Boulou Ebanada de B’beri, reached out to them hours later, which the organizers describe as a “disheartening and concerning phone call.” According to the Coalition, Ebanada de B’beri, who is located in Cameroon, said he was new to the role and needed more time to catch up before engaging in this discussion.

After 100 hours of the protest, a meeting was to take place with President Jacques Fremont and Vice-Provost Jill Scott but it was later postponed by Scott. Student organizers of the protest demanded that the meeting take place that day, no later then 3 p.m., but they failed to secure a meeting with administration officials.

Due to the lack of response from senior administration, and because of the pandemic, the student’s ended the sit-in after 120 hours (five days straight).

For those interested in the campaign, the Coalition suggested ways to engage on the issue: