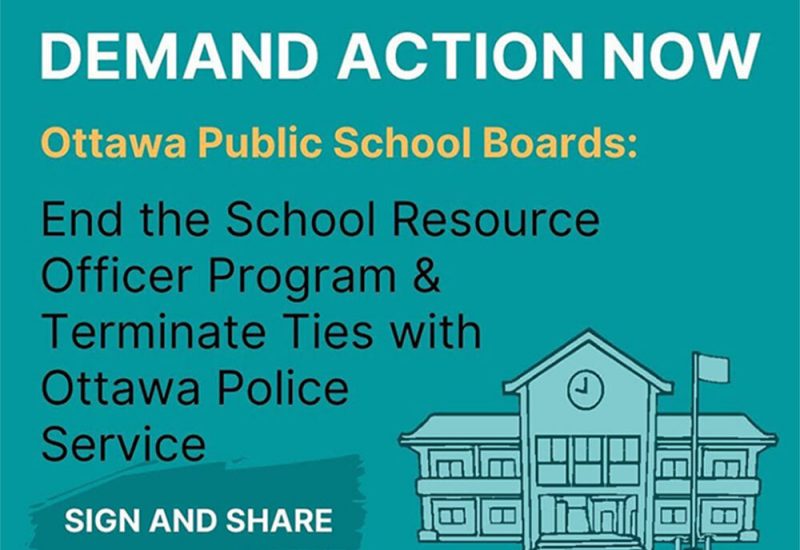 The effort to defund Student Resource Officers (SROs) in Ottawa schools has pressed on for months. Despite the Ottawa-Carleton District School Board’s (OCDSB) decision to keep funding for two SROs, students have continued fighting against the presence of police officers in schools. SROs can create a tense and imbalanced learning space for marginalized students, according to ASILU, a feminist and anti-racist collective formed in 2020.

Each public school in Ottawa gets assigned one of these officers which function as a “personal police contact” for the school according to the Ottawa Police Service. All four public school boards in Ottawa participate in the program but there has been a recent push to defund SROs.

Hailey Dash, the co-founder of ASILU, says a major issue perpetuated by the SRO program is the school to prison pipeline. This is where racialized and marginalized students are likely to go from being in school to being in jail due to the over policing of their communities.

“The school to prison pipeline does this from a very young age which is why it is so dangerous. These students are exposed to police violence from childhood,” Dash said.

“We see that instead of viewing a lot of the behaviour of these racialized students as typical teenage behaviour,” Dash said. “Their behaviour is seen as criminal or deviant. Because of this, they are under surveillance a lot more intensely than their white counterparts.”

In August, OCDSB voted to defund two SROs but eventually went back on this decision. According to Lyra Evans, a board trustee, the decision was undone because the board felt the program needed to go under further review before being altered.

“They decided that changes were more requiring of community consultation,” Evans said. “They felt that since the SROs have been there for a number of years already, removing them without direct consultation of the communities and students at those schools wasn’t fair.”

“It was upsetting,” Dash said of the decision, “to see that they weren’t willing to listen to the voices that are most impacted by this.”

Evans felt the reasoning behind not defunding the two SROs was unsound.

“We heard loud and clear from members of the marginalized communities most impacted by police in those areas that police that police were negative. They were a detriment to mental health, a detriment to focus and had negative interactions with students,” Evans said.

Dash said she hopes for change for racialized students and communities.

“The youth in Ottawa have spoken,” Dash said. “I think only barrier free education can be ensured through the removal of police presence in schools.”