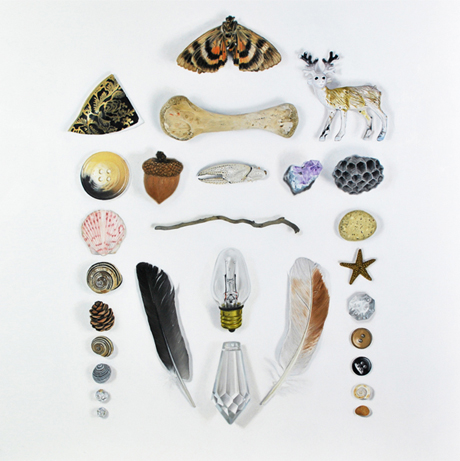 Flickering Flashlight sounds familiar from the very beginning, most likely because it borrows from so many sounds, including many Canadian artists both past and present. Fronted and let by Adam Waito (formerly of Miracle Fortress), he is joined by fellow Miracle Fortress member Nathan Ward, as well as Rebecca Lessard, Scott Johnson Gailey, and Jordan Robson-Cramer on Adam & the Amethysts’ sophomore album.

The opener and closer, which bookend the record, are a bit of a curve ball—an instrumental piece consisting of cello, organ, and percussion that isn’t really representative of the rest of the album, but show amazing talent from the musicians. The follow-up, ‘Prophecy’, is perhaps one of the best songs on the album, coming across as a product of Canadian musical heritage, with whoop whoops reminiscent of some Arts & Crafts bands, and an end that riffs off Auld Lang Syne and our own Scottish heritage.

The use of a polka rhythm for ‘The Country’ seems misplaced, given the song’s lyrics about longing to return home—a tribute to Waito’s Thunder Bay origins and his move to Montreal. It balances out towards the end of the song, and the chorus will resonate with anyone who’s been away from home for far too long.

Given the sound quality of the record, it’s hard to believe that it was recorded in Waito’s apartment without soundproofing. Despite his claims that traffic sounds can be heard in the background, the album sounds studio-produced, and the vocals come out especially strong throughout the album—perfect for songs like ‘Adam Called Me Over Christmas’, where the lyrics are heartbreaking and beautiful.

A bit of a mix of sounds, Flickering Flashlight isn’t necessarily a cohesive album, but individually the songs are strong. They falter a bit when the band tries to unite two very estranged elements, but the kinks are usually worked out by the end. The album slows down considerably during the second half—a bit of a let down giving how strong and lively ‘Prophecy’ is, but this draws the focus to Waito’s vocals and lyrics. For the most part, Adam & the Amethysts capture the tenuous balance between country and city that embodies the journey of so many Canadians.