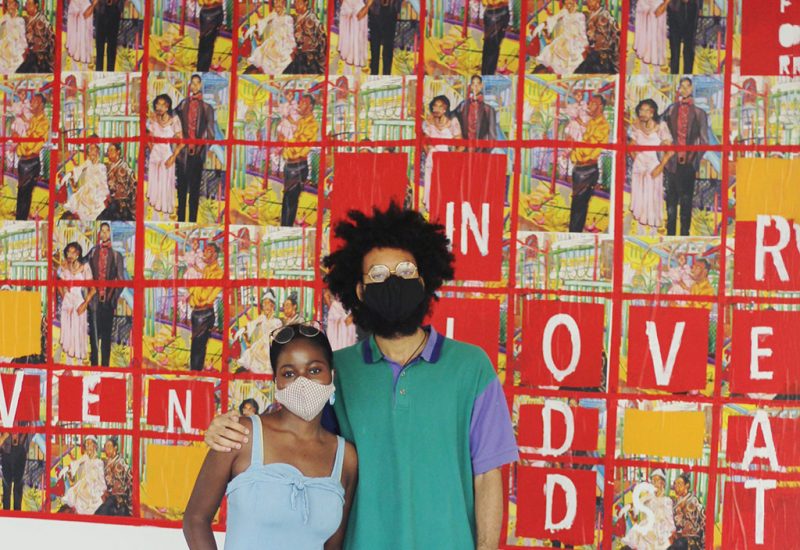 Fineus (left) said she used her public art piece “Microcosm” to bring a sense of warmth to these cold and lonely times. Photo courtesy of Fineus.

Solitude has become familiar for people all over the world during the pandemic and for artists in Ottawa, COVID-19 restrictions and lockdowns have often brought creative slumps.

Ottawa digital painter, Lorgio Nim, said the pandemic did not bring many changes to his own creative process, but he definitely sensed a change in his peers.

“I’ve seen my peers who are very extroverted in their approach to expressing their art form, who do performative arts or paint live, they have been very affected because we can’t gather in crowds,” Nim said.

Nim, who says he takes an introverted approach to his art, still ran into difficulties during COVID-19 lockdowns and isolation.

“If I want to take a break, I can’t really do much outside,” Nim said. “The biggest hinderance for me has been a matter of pacing. I’ve been paced by what’s going on outside.”

“With everything being online I feel like there’s more work than there used to be,” Effah said. “It gives the illusion that people have more time but with that illusion means work is becoming more demanding.”

“I just really went into a slump at first,” Fineus said. “Also, everything that was going on with the social movement, with Black Lives Matter. That felt very heavy on me as a Black woman artist. Seeing this Black pain was not encouraging to keep making work.”

Nim also said he found himself feeling inundated by work.

“I found myself often getting drained because I didn’t have a valid reason to stop myself,” Nim said.

Effah, Nim and Fineus are all members of the Ottawa Black Art Kollective (OBAK), which is a group dedicated to supporting Black artists in the region. After Black Lives Matter began getting heightened attention, Nim and Fineus began working the themes of racial justice into their art.

Nim was inspired to put two pieces out in quick succession. One piece was called “Suffocated” and the other was called “WE can’t breathe.” Nim said on his Instagram that the recent events had inspired him to work most of the day and well into the night.

“That was more of a moral obligation,” Nim said. “COVID-19 hasn’t really affected my vision because before that my vision was pretty independent of exterior factors.”

Fineus also explored themes of race in her art. She worked with the City of Ottawa to put up a temporary mural in Orléans. Fineus said she was inspired to share messages of love, hope and community in her piece due to the pandemic.

“I used multiple photos of my own family and people I love,” Fineus said.

Fineus’ piece “Microcosm” provided Black representation in the public art space. She is now starting a new piece where she uses her photography skills to explore Black and Haitian femininity.

Having experienced isolation fueled creative slumps and coming out the other side, Fineus, Effah and Nim are all happy to be working again.

Effah said he feels he has no choice but to make art. He said that if the choice was between producing something or doing nothing, work was the obvious better option.

“For me what was important was to just make again,” Fineus said.

Nim also found a sense of normalcy in making art. When he began making again, he said he was reminded of why he loves the things he does.

“The feeling of taking an idea, realizing it and putting it on screen or on canvas does not change at all. Whether pre-COVID-19 or post-COVID-19, that feeling is the most fulfilling for an artist,” Nim said. “That feeling is what keeps me going.”