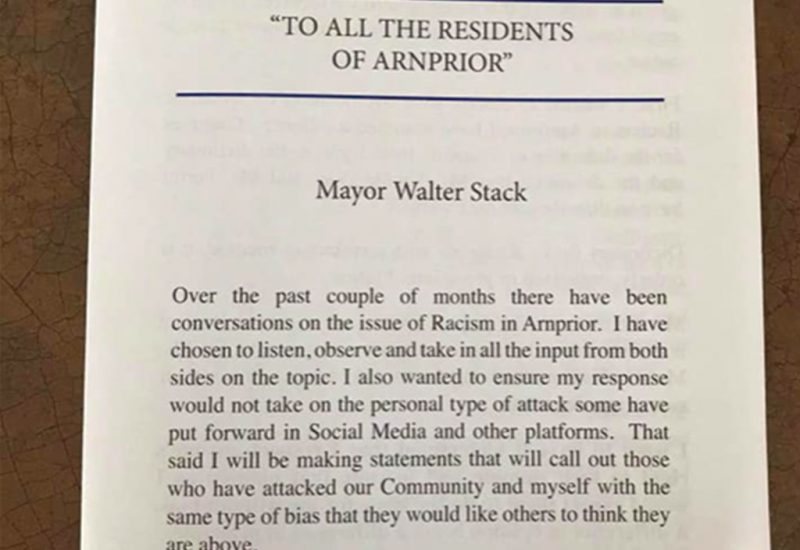 Mayor Walter Stack sent this letter out to residents of Arnprior which asserts that racism is not systemic in the town. Photo by Sophie Smith-Dore.

Arnprior Mayor Walter Stack recently sent out a letter saying he did not believe racism to be systemic in his town. On the week of Jan. 28, Arnprior residents found a letter in their mailboxes entitled “My Opinion.”

“I do not believe racism is systemic in Arnprior,” Stack wrote in the letter.

Outrage ensued from BIPOC residents who felt this letter was a blatant disregard of their voices.

“I was so outraged that there was this privileged white man saying to his BIPOC constituents, ‘No, your experience is not real,’” said Sophie Smith-Dore, an Indigenous woman and social justice advocate living in Arnprior.

The mayor came to this conclusion by examining two definitions of systemic racism.

“Dictionary says: [systemic racism is] acting out with a system or method, it is orderly organized or procedural routine,” Stack’s letter continues.

He also used a description of systemic racism put forward by Smith-Dore which stated it is an embedded normal practice in a society. Stack said he did not believe racism in Arnprior to be systemic by any of these definitions.

“I certainly do not believe it is embedded as a normal practice in our community,” Stack wrote.

But Arnprior justice advocates say that using Stack’s description, as well as descriptions of systemic racism pulled from other sources, it is easy to find instances of racism that can be described as systemic.

Katie Perfitt, a racial justice advocate based in Arnprior, said that the mayor’s ability to disregard these stories of racism in Arnprior is demonstrative of how embedded it is in society.

“Systemic racism is so embedded it can go unquestioned as normal practice,” Perfitt said.

Ro Nwosu, a Black yoga teacher who works in Arnprior, made a similar point, saying that racism is not always apparent when you have become accustomed to it due to it being embedded in society. But she said this does not mean you can deny it.

“He believes that because the municipality has codes of conduct and other such rules against racism, racism is not systemic,” Nwosu said. “That is not true.”

It was a sentiment that Smith-Dore echoed in her letter to the mayor.

“Systemic racism simply means that racism is embedded as a normal practice within society. This isn’t arguable. Denying that it exists HERE in our town means you either don’t understand what it is, or you are part of the problem,” Smith-Dore wrote.

What are the embedded practices in our society that Nwosu, Perfitt and Smith-Dore are referring to?

According to the American Psychology Association (APA) institutionalized racism is “a system of assigning value and allocating opportunity based on skin color. It unfairly privileges some individuals and groups over others and influences social institutions in our legal, educational, and governmental systems.”

Smith-Dore says that unequal opportunities that result from institutionalized racism, as described by the APA, are very present in Arnprior

“Perhaps you haven’t noticed that you’re surrounded by white folks in council,” Smith-Dore wrote in a letter to Mayor Stack. “This isn’t simply because no POC has run. Because of systemic racism, a POC would not have the same opportunity or be encouraged to take a path a white person would take without questioning it.”

“There are not many visible minorities in power jobs or jobs with benefits. There is no representation and no effort to build more opportunities,” Nwosu said. “The rules regulations and opportunities in Arnprior do not provide space for BIPOC to put forward anything.”

The second half of the APA description is that BIPOC may face unfair disadvantages in legal, educational and governmental systems. Smith-Dore had experienced discrimination in social institutions first hand.

Smith-Dore shared her experience of racism in the medical sector in a comment on a Facebook post to the group “What’s Up, Arnprior?” She said she was asked if she was Indigenous and how much she drinks per week in quick succession. She wrote that her white husband does not face the same questions or assumptions, despite having the same doctor.

“I know you might be thinking that a single person’s bias isn’t a systemic issue but a personal one — but you’re wrong,” Smith-Dore wrote in her letter. “If an elementary school teacher has a bias, they will treat that child of colour differently than the white students and the opportunities provided to them and the quality of involvement in that child’s experience will be different from their white peer.”

Smith-Dore asserts that saying racism is systemic in Arnprior is not an opinion but a fact. She said it is a fact that needs to be acted upon now.

“You, as a democratically chosen leader of our town, need to step up and embrace the brave POC sharing their stories with you and promise to do better,” she wrote.